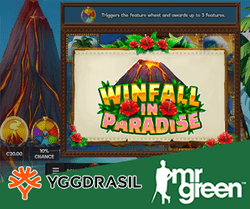 Join Yggdrasil Gaming on a new adventure at Mr Green Casino, watch Tidal Waves crash and Hurricane Winds blow while lava builds in anticipation of the eruption of the Windfall in Paradise slot machine game.

Crashing Tidal Waves and Hurricane Winds regularly ravage tropical islands; some have active volcanos adding further potential for destruction to the already volatile cauldron of events. Such devastating phenomena signify times of catastrophe and great peril followed by periods of growth and renewal. Such times create opportunities to generate and accumulate great wealth. Yggdrasil Gaming launched Winfall Paradise, a 5 reel - 20 fixed payline online slot in late September 2021. It transports players to a tropical island volcano that erupts once every hundred years which serves as the main win generating feature in our Winfall in Paradise review.

Watch how the Lava builds, increasing the odds to activate the Bonus Wheel. The Bonus Wheel is the key to unlocking three potential wealth creating opportunities, the Volcano, the Wave, and the Wind. The Volcano bonus round explodes into action with the Persistent Win It Again feature, each crashing Wave feature may wash Random Wilds ashore, while the Wind feature blows in the Symbol Upgrade feature. However, the possibility of seeing combinations of all three bonus features appearing simultaneously during Free Spins is one of the slot's highlights! The Bonus Wheel has the potential to deliver wins up to 5,000x your original stake. Enjoy the brute force of mother nature in Winfall in Paradise while on the go via the Mr Green mobile casino app.

In this review of Winfall in Paradise we reveal every interesting detail found in its impressive range of exciting bonus features. Generous special bonus features like wilds, scatters, bonus wheel, wave modifiers, wind modifiers, win again volcano, and free spins offer players the chance to substantially increase their entertainment budget. However, the option to simply Buy a Bonus allows players to head straight to where they can find the game's biggest potential winning combinations.

The Bonus Wheel triggers instantly whenever the wheel symbol lands anywhere on the 5th reel. While reviewing Winfall in Paradise the 5th reel wheel grew to display all three special features in a variety of potential winning combinations. Players could randomly enter the Volcano. Wave, or Wind bonus features. Starting at 10%, a colourful Bonus Wheel Indicator, located at the bottom left, displays the odds of landing a Lava symbol as a bonus symbol on the 5th reel. This activates the Bonus Wheel which provides players with an opportunity to activate one of the three bonus features. Each new Lava bonus symbol that lands improve the player's odds of winning by an additional 5%.

The Turtle serves as the scatter symbol, if three Turtles land simultaneously anywhere on the 1st, 3rd, and 5th reels the win rewards with 7 Free Spins. However, during our Winfall in Paradise review at Mr Green Casino we managed to land three more Turtles during a round of free spins and received another 7 Free Spins. Players can re-trigger additional free spins multiple times to win a maximum of 35 Free Spins! Once a player has won the maximum of 35 free spins, any additional Turtles that land will earn 10x cash prizes. To top off all the excitement if all these bonus treats are not enough, players can trigger the Volcano, Wave, and Wind features on the Bonus Wheel combined during free spins rounds!

While reviewing Winfall in Paradise we thoroughly enjoyed testing the Buy A Bonus feature since it allows players to purchase Free Spins and cut straight to one the most profitable bonus rounds. Players can freely buy a round free spins by selecting the bonus button located at the bottom left of the control bar. Once purchased, the round starts with 7 Free Spins that enjoy all the benefits of regular free spins and are subject to the same set of rules governing a round of regular free spins.

Standard playing cards from 10 to Ace make up the low value symbols that pay from 0.4x to 5x your stake. The Island Maiden, Surf, Volcano, Palm Tree, and Conch all represent high paying symbols that can deliver wins worth from 0.8x to 12x your bet value.

With 20 always active paylines the available coin range can accommodate bets starting from just 0.20 yet will accommodate generous bet stakes worth up to 50.00 per spin.

Play the New Winfall in Paradise at Mr Green Casino

Our review of Winfall in Paradise revealed high variance slot mechanics with an RTP of 96.2% and a theoretical maximum win of 14,510x your stake. The mechanics calculate wins from left to right for matched 3 to 5 of-a-kind symbol combinations; take note only the highest win values will pay out. Before our review of Winfall in Paradise we first familiarised ourselves with the intricacies of the game by trying it out in demo mode as a free slot. To further lower the risk factor and improve profitability we also recommend that players should claim a Mr Green Casino bonus before they invest real cash money.