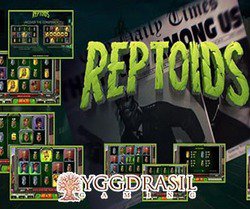 Yggdrasil gaming released the new Reptoids slot to casinos that offer the Yggdrasil casino software just before the holidays and to date, it is by far one of the best alien-themed slots released. The slot offers artwork that is inspired by the 60's and tells the story of aliens taking over the world. As you enter the game, the aliens have already managed to penetrate the government and are now coming after you! If you are successful in stopping them, your reward will be up to 500,000 coins.

Reptoids features 20 paylines and 5 reels and brings life to the popular theme of an alien invasion. Yggdrasil has done a fabulous job with its graphics and their vintage design with aliens disguised as humans. These include a policeman, nurse, scientist, army general, reporter, Reptoids president and a scientist.

The Reptoids president is a valued symbol and can reward you up to 50x your bet with five appearing on adjacent reels. The scatter symbol, represented by the gold coin, is the highest paying as it will award as much as 5000x your stake if five stop in position on a payline. Additional payouts are offered for 2, 3 and 4 gold coin scatters.

The main feature in Reptoids is the Repto Detector. This is a device that will scan the reels randomly in search of aliens during base gameplay. Any symbol that lands within the detector turn wild and all other symbols that are identical will also become wild to help complete winning combinations. Where this becomes powerful is when the gold coin scatter lands in the detector as this will activate seven free spins. As a bonus, detecting two reptoids while the free spins are active will see two extra free spins being awarded.

Yggdrasil Gaming has stated that the new slot delivers an RTP of 96.1% and will be accessible on all platforms, including Android and iOS mobile devices. A unique feature added to the new game will allow you to replay big win spins and use a "BRAG tool to share with friends.

The new slot has been released and is ready for play at Mr Green Casino. Along with Yggdrasil Gaming slots, Mr Green offers an exciting lineup of casino games from the likes of NetEnt, Microgaming, Play'n Go, Thunderkick, Elk Studios and NextGen Gaming to name just a few of the more than 300 available slots offered. New players can register today at Mr Green and enjoy a 100% match up to $100 on their first deposit and receive 20 free spins on the Quickspin slot Crystal Queen. Why wait, register and begin your Mr Green experience today!