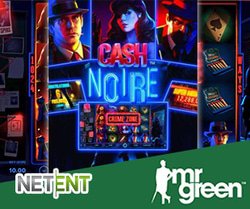 Join Mr Green Casino to solve a murder mystery while spinning the reels on the new Microgaming slot, complete with Mystery Symbols, Free Spins, a Crime Zone feature, and more.

If you enjoy solving mysteries, you'll be pleased to know that NetEnt designed the ultimate murder mystery in the form of a captivating video slot that you can enjoy at Mr Green Casino. The murder was committed in the city of San Cayetano and you will need to join forces with Detective Flint to successfully solve the Green Ace murders by tracking down the mysterious criminal. The action unfolds in the Cat's Eye bar where you'll be greeted by a gorgeous woman smoking a cigarette. From there, it's all up to you to get to the bottom of this heinous crime.

Developed by NetEnt, the slot is called Cash Noire and its incredibly well presented across five reels with four rows along with 1,024 Ways to Win. With a dark and ominous atmosphere that perfectly complements the theme, you can also look forward to an assortment of magnificent bonus features, including an Avalanche feature, a Crime Zone feature, a Mystery Symbols feature, a Free Spins feature, and multipliers along with a top paying jackpot worth 1,033 times your total stake. Join Mr Green Casino today to play the new NetEnt slot on the Mr Green Casino instant-play platform or the mobile version while you are out and about.

If you are looking for a video slot filled with a decent range of epic bonus features, you don't have to look further than NetEnt's Cash Noire slot. The game comes equipped with three bonus features and utilizes an innovative Avalanche feature to provide plenty of lucrative winning opportunities during each gaming session.

The Avalanche feature was first introduced in the popular Gonzo's Quest slot and has since managed to infiltrate a number of captivating slots from NetEnt. It essentially functions the same way as the Rolling Reels feature where all the symbols that form part of a winning combination will disappear only to make room for brand-new symbols to land in the vacated symbol positions. This creates another chance to generate a winning combination and will continue until there are no new winning combinations formed on the reel set.

The new Cash Noire slot from NetEnt also comes equipped with a Crime Zone feature. Every time you set the reels in motion, you will notice a red patch of hotspots appearing on the reel set. You will initially only find three hotspots on the reels. However, the hotspots can quickly expand to feature 4 or 5 hotspots when you clues from the Clue List are activated in the game. When you land symbols within the Crime Zone, you will trigger an item from the Clue List embedded in the game.

You will also benefit from a fantastic free spin feature at Mr Green Casino while playing the new Cash Noire slot. You will notice that the game offers a Clue List meter that you will need to monitor as this will show you your progress to unlock the free spins round. Once you've activated between 3 and 6 clues, the Crime Zone will expand to 4 spots. Once you've activated 7 clues or more, the Crime Zone will expand to 5 spots. Once you activated 13 clues, the free spin feature will be unlocked and you'll be rewarded with 6 free games.

Each time the car reaches a total of 13 locations, you will be awarded 2 additional free spins. Every time you reach a total of 7 locations, the multiplier value will be increased by 1x. If you manage to reach the last destination on the City Chase Map, you will receive a 10x multiplier along with 3 free spins and the case will be closed. You can reach new locations on the map by landing winning symbols within the Crime Zone hotspots.

Symbols to Watch Out For

The new Cash Noire slot offers an excellent variety of symbols that will further enhance the murder mystery theme embedded in the game. The highest-valued symbol is the beautiful woman smoking a cigarette, paying up to 8 times your total bet size when she is displayed five times across a single payline. You can also generate winning combinations with a range of other symbols, including pistols, daggers, whiskey tumblers, Ace cards, matches, and magnifying glasses.

If you are searching for a slot with loads of flexibility when it comes to betting options, you'll be pleased to know that the new Cash Noire slot has you covered in that department as well. You can start solving the case from only $0.20 a spin or you can greatly increase your chances of winning big by betting the maximum of $200.00 on a single spin.

NetEnt's new Cash Noire slot offers a return to player ratio of 96.06% and is seen as a low variance slot with plenty of small wins on a frequent basis. Before you join the detective in the city of San Cayetan, we strongly recommend that you claim a bonus at Mr Green Casino as this will prolong your gaming session and increase your chances of winning thanks to a bigger bankroll.