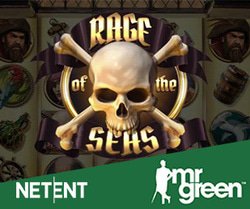 Take to the high seas as a fearsome pirate while playing the new NetEnt slot at Mr Green Casino, complete with a boost feature, random features, free spins, and more.

The latest video slot from Netent is bound to keep you glued to your screen as it impresses with a hypnotic pirate theme where you'll take to the high seas to plunder some lucrative rewards. The new slot is called Rage of the Seas and its magnificently well presented with a pirate ship as the center of attention. You will also be greeted by an assortment of formidable characters that want nothing more than to help you find the missing loot that is buried on a deserted island.

The new Rage of the Seas slot from NetEnt is propelled by 5 explosive reels and 4 rows along with a 1,024 Ways to Win payout structure that can expand to provide a whopping 5,488 Ways to Win. The game is also bursting at the seams with bonus features to significantly boost your bankroll, including a Boost feature, five random features, and a free spin feature along with a top prize worth 27,440 times your stake. The new Rage of the Seas also offers added flexibility that will allow you to play the game through the Mr Green Casino instant-play platform on either your desktop or mobile device.

Rage of the Seas Slot Features

The new Rage of the Seas slot from NetEnt will offer a total of six bonus features, ranging from the Boost feature through to the Free Spins feature and beyond. Let's take a look at each of the bonus features that are sure to see you play for hours on end.

The first bonus feature you'll come across in the new Rage of the Seas slot is the Boost feature. You will need to be on the lookout for a wooden crate that will act as the boost symbol in the game. It will only make an appearance on the second, third, and fourth reels to activate the Boost feature. Once the Boost feature is activated, a monkey will climb to the windows at the top of the reel set and expand one of the three reels to display 7 rows. You will also receive 4 feature spins with the new reel structure.

The Spreading Wild feature will provide a spreading wild symbol on any of the center reels. Once it lands, it will reward you with up to two spreading wild symbols onto adjacent symbol positions that will cover the existing symbols. However, please take note that it will not spread across the first and fifth reels. The Stacked Wild feature will provide a stack of wild symbols that will appear anywhere on the center reels and will cover up to 4 symbol positions.

The free spins feature in the new Rage of the Seas slot from NetEnt can be unlocked in two ways. You can either display three boost symbols in the base game or during the Feature Spins on the second, third, and fourth reels, or you can land three scatter symbols that are portrayed by the pirate skull. When you display 3, 4, or 5 skull scatter symbols anywhere in view on the reels, you'll be awarded 5, 8, or 12 free spins, respectively.

The symbol selection in the new Rage of the Seas slot is another reason why players continue to flock to this game. While playing the NetEnt slot at Mr Green Casino, you'll be greeted by two male pirates along with two female buccaneers as the high-paying symbols. You will also find a bunch of low-paying symbols to complement the pirate theme, including a ship steering wheel, a blue and red parrot, a hammerhead shark, a bottle of rum, a barrel, and a ship anchor.

Even though the slot will be restricted by the non-adjustable payout structure, you will still be able to choose from a plethora of bet options to suit your pocket size. The smallest bet you can make in the game comes in at $0.20 a spin, while high rollers will appreciate the fact that the game comes with a maximum bet size of $400.00 a spin.

NetEnt's new Rage of the Seas slot offers an incredible 96.04% return to player ratio and is deemed as a medium to high volatility slot. Before you take to the high seas in search of forgotten loot as a fearsome pirate, we suggest that you claim a Mr Green Casino bonus to prolong your gaming experience and to hopefully increase your chances of winning!