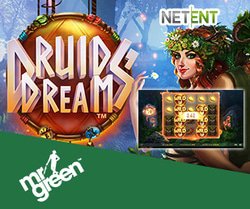 Immersive yourself in Celtic mythology at Mr Green Casino while playing the latest NetEnt slot, complete with scatter symbols, wild symbols, a free spin feature, a nudge feature, and more.

The latest video slot at Mr Green Casino will take you on an epic adventure to an enchanted forest where you will be introduced to two Druids with magical powers. During your visit to their enchanted forest, you will gain the skills and attributes needed to become a powerful Druid yourself, giving you the necessary tools to fully embrace Celtic mythology while also claiming huge rewards and instant-cash prizes along the way. Developed by NetEnt, the slot is called Druid's Dream and it comes with spectacular graphics and incredible sound effects to ensure you stay glued to your screen.

The new Druid's Dream slot from NetEnt offers a mystical and relaxing theme coupled with a calming soundtrack that will give you the impression of a spa retreat. The slot is propelled by 5 reels with 4 rows and includes 40 non-adjustable paylines along with a plethora of lucrative bonus features that can easily boost your bankroll once they are activated on the reels. The bonus features include sticky wild symbols, scatter symbols, a Wild charge feature, a Respin feature, a Nudge feature, and a Free Spin feature along with a top jackpot worth 200 times your total bet size.

If you are interested in playing the new Druid's Dream slot without having to download any additional software, we highly recommend that you play the game on the Mr Green instant-play platform on either your desktop or mobile device for added convenience.

The new Druid's Dream slot from NetEnt offers an interesting selection of symbols on the reel set that is perfectly suspended from the various enchanted trees that surround the 5x4 reel structure. The low-valued symbols in the game include four rune stones in different colors, including red, yellow, green, and blue. The high-valued symbols include white wolves, owls, drums with paw prints, and orange rocks. The highest paying symbol is the white wolves, providing a top jackpot prize of up to 5 times your total bet size.

Even though the game is somewhat limited with 40 fixed paylines, you will still have plenty of control when it comes to placing a bet that suits your pocket. The minimum bet in the game is only $0.20 along with a maximum bet amount of $400.00 per spin. This means that both high rollers and newcomers will be able to enjoy the game without having to worry about breaking the bank in the process.

NetEnt's new Druid's Dream slot is essentially a medium to high variance slot with an incredible 96.00% return to player ratio. Before you venture off to an enchanted forest, we highly recommend that you claim your exclusive Mr Green Casino bonus as this will prolong your stay and increase your chances of winning in the process.