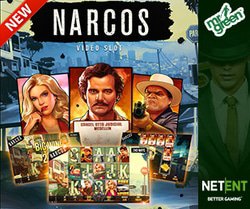 Enter the drug-fuelled world of Pablo Escobar and hunt him down for extraordinary riches when you play the latest NetEnt slot at Mr. Green Casino.

The latest slot title from the creative minds at NetEnt is based on the extremely popular Netflix television series, Narcos. You've been invited to enter the dark underworld of Columbia during the 1980s where two DEA agents are hunting down Pablo Escobar and his gang to stop his cocaine empire. Fitted with all the original characters from the show, the slot promises to unlock some glorious payouts and rewards coupled with amazing graphics and exciting sound effects to provide a memorable reel-spinning adventure.

The new Narcos slot from NetEnt casino software plays out over a 5x3 reel structure along with a staggering 243 Ways to Win. You will also be impressed with the bonus features infused in the game, including wild symbols, walking wilds, a Locked Up feature, a Drive-by feature, multipliers, and free spins along with a 300-coin jackpot prize available in the base game. The game can be enjoyed on Mr. Green's no download casino platform or on your mobile device for added flexibility.

The gold DEA badge will act as your wild symbol on the reel set and will substitute for all standard symbols to potentially form a win. However, it will not stand in for locked up symbols or scatter symbols. Once the DEA wild symbol forms part of a winning combination, you'll automatically activate the Walking Wild feature. During the feature, the wild symbol will remain on the reel set and will shift one horizontal position to the left with every spin. The Walking Wild feature will stay active until no more wilds are left on the reels.

During the base game, you will come across the Drive-by feature that is randomly triggered after any completed spin. Once triggered, a car will drive up from behind the reel set and start shooting symbols that are currently presented on the reel set. Once the shooting is over, the injured symbols will transform to display wild symbols or higher-valued symbols to hopefully activate a winning combination to boost your bankroll.

The first reward will be a multiplier value within the cluster that can either be a 2x multiplier or a 3x multiplier. The second reward is upgraded symbols where the value of a symbol will increase by 1x the bet size which can occur between 7 and 15 times. The third reward will include additional value being added to the Golden Locked Up symbol. Should you be lucky enough to land a new Golden Locked Up or Locked Up symbol next to an existing winning cluster, the free spin value will reset back to 3.

Lastly, the new Narcos slot from NetEnt also offers a magnificent free spin feature that you can trigger by displaying a minimum of 3 free spin symbols on the first, third, and fifth reels simultaneously. Once triggered, you will receive 10 free games and on each spin, one or more high-valued symbols can randomly change into a wild symbol for more lucrative payouts. You will also be able to take advantage of the Walking Wild feature during the free spins round.

As previously mentioned, the new Narcos slot provides a terrific selection of symbols that have all been taken from the iconic Narcos television show that airs on Netflix. The two DEA agents, Javier Pena, and Steve Murphy are the highest valued symbols in the game, each awarding 300 coins when 5 lands on an active payline. They are accompanied by Steve's beautiful blonde wife, Connie Murphy, and Gacha, a member of Pablo Escobar's gang. You will also be able to increase your cash balance with pink flamingos and small airplanes along with card symbols that have each been decorated with grenades, machine guns, money, and pistols.

NetEnt's Narcos slot also offers a marvelous range of betting options to ensure both high roller and newcomer can enjoy the game, regardless of their pocket size. You'll be able to adjust both the bet level and coin values in the game. This ultimately gives you a minimum bet of $0.20 to set the reels in motion along with a maximum value of $400.00 per spin.

The new Narcos slot from NetEnt has a 96.23% return to player ratio and is regarded as a low to medium volatility slot. Before making your way to Columbia, remember to claim a welcome bonus at Mr. Green Casino to prolong your online gaming experience that could lead to some explosive winning opportunities.