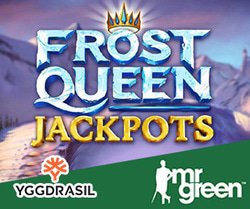 The latest slot creation from the creative team at Yggdrasil Gaming will allow you to escape reality as you visit an icy wonderland that is ruled by the Frost Queen. You'll get the opportunity to explore her palace where you'll need to search for hidden keys to unlock some of the most lucrative cash prizes and rewards in the game. The slot is called Frost Queens Jackpots and it impresses with outstanding graphics and realistic sound effects that are bound to keep you playing for hours on end. Just remember to bring a jacket as it will undoubtedly send shivers down your spine.

The new Frost Queen Jackpots slot from Yggdrasil Gaming offers up the usual five reels and three rows structure along with 20 non-adjustable paylines that will produce all the winning opportunities within the game. You will also appreciate the fact that the game comes equipped with an enormous selection of bonus features to provide an added layer of excitement to your gaming experience, including a Pick and Click Chest Game, a Treasure Chest Bonus Game, a Magic Mirror Feature, a Free Spin Feature, Multipliers, and Scatter Icons along with a 2,000-coin jackpot prize up for grabs in the base game. You'll also be pleased to know that you can enjoy the slot through the Mr Green Casino instant-play platform on both your desktop and mobile device for added convenience.

When you launch the game on your desktop or mobile device, you'll be greeted by a 5x3 reel layout that has been embedded within a block of ice. In the background, you will find the Queen's palace on the right with snow-capped mountains on the left. Apart from the visual attractions in the game, you will also be greeted by a plethora of captivating bonus features to pique your interest even further.

The Treasure Chest Bonus feature is essentially a classic pick-me feature where you'll be transported to a new screen to pick between three treasure chests. If you manage to reveal a cash prize or a golden key, you will advance to the next level of the feature where you'll need to pick another treasure chest. However, if your pick is covered by an avalanche, it will end the bonus feature.

The Jackpot Free Spins feature will award you with 10 free games along with a 3x multiplier on all winnings you accumulate. You will also have the opportunity to win one of five progressive jackpots. On every free spin, you might see a gemstone appear on the reels. When you land a gemstone on the reels, it will be collected by the meter situated above the reel set. You will win the corresponding progressive jackpot when you've collected five gemstones of the same color.

Apart from unlocking the free spin feature through the Magic Mirror feature, you will also be able to unlock it by collecting five keys during the base game. You will notice that each of the five reels will come equipped with five empty key slots in different colors. Every time you display a key on the reels, it will unlock one of the five key slots. Once you've collected five keys of the same color, you will unlock the Jackpot Free Spins feature where you'll receive 10 free games.

The final bonus feature in the game is the Pick and Click Chest feature. To activate this feature, you simply need to land two mirror scatter symbols anywhere in view on the reels. Once the feature is activated, you will need to pick one of five treasure chests. You can either win a cash prize worth 4 times your bet size, an entry into the Treasure chest feature, an entry into the Jackpot Free spins feature, or 1 random key that will unlock one of the five key slots in the base game.

Once you've familiarized yourself with the wide variety of symbols, you will need to select your preferred bet amount before you can set the reels in motion. The new slot comes with a broad range of coin values to suit all types of players. The coin values range from $0.01 up to $2.00 which will give you a minimum bet value of $0.20 and a maximum bet value of $40.00. You will also be treated to a selection of additional features, including a Max Bet feature, an Autoplay feature, and several Sound Settings to make you stay as pleasant and enjoyable as possible.

Yggdrasil Gaming's new Frost Queen Jackpots slot is a low variance game with an RTP of 96.00%. However, it's worth mentioning that 3.8% of the RTP will go towards the five progressive jackpots which means the actual return to player ratio is 92.20%. Before you visit a fantasy world covered in snow, we suggest that you claim a Mr Green Casino bonus as this will greatly increase your chances of winning one of the five progressive jackpots!