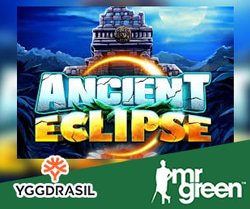 The latest slot release from the creative studio at Yggdrasil Gaming will give you the opportunity to embark on a fascinating adventure back in time. Your destination is Mexico where you'll get to witness the awe-inspiring Mayan temples in all their glory while you spin the reels to unlock some truly lucrative rewards and instant cash prizes. The slot is called Ancient Eclipse and it features a Mayan-style temple situated in a dense forest that provides a primitive feel to your gameplay experience.

The new Ancient Eclipse slot from Yggdrasil Gaming is magnificently portrayed across 5 reels and 4 rows along with 50 non-adjustable paylines offering up all the winning opportunities on the reels. You will also be welcomed by a drum-heavy, rhythmical backing soundtrack that will keep you on the edge of your seat with every spin you initiate. Apart from the sound effects and spectacular visuals, you'll also find tons of exciting bonus features that include a wild symbol, scatter symbol, multipliers, an Eclipse feature, and a locked frames free spin feature along with a top cash prize of up to 10 times your total stake. Play this exciting slot on your mobile or through the instant-play platform at Mr Green Casino while relaxing at home.

The bonus features that have been embedded in the new Ancient Eclipse slot from Yggdrasil Gaming is quite unusual compared to other video slots. The Eclipse feature takes center stage in this game, delivering waves of multipliers and wild symbols to boost your winning potential. You will also find a free spin feature, scatter symbols, and a wild symbol to add to the excitement. The action unfolds in a dense forest where the reels have been cleverly placed inside a Mayan temple.

The game also comes equipped with a Locked Frames Free Spin feature that you can activate by displaying at least three feathered headdress scatter symbols on the reels. Please keep in mind, however, that the feathered headdress scatter symbols will only appear on the second, third, and fourth reels. When the locked frames free spin feature is activated, you will receive a total of 12 free spins.

At the start of each spin, all wild symbols that were displayed in the previous spin will award you with a sticky sun frame. Once a sticky sun frame is activated, it will remain on the reels until the free spin feature is completed. Should you display a moon symbol but can't activate the Eclipse feature, you will also receive 1 additional free spin during your gaming session.

To keep you entertained while you patiently wait for the bonus features to be triggered is a fantastic collection of slot symbols that will undoubtedly make you think of Mayan civilization. The most rewarding symbols in the new Ancient Eclipse slot are the two ancient gods that have been carved out of stone. The deity that comes equipped with a red gemstone eye will provide the highest standard payout in the game, boosting your bankroll by 5 times your total bet size. You will also find playing card suits carved in stone along with eagle carvings, tiger carvings, and crocodile carvings.

Once you've got acquainted with the wide variety of slot symbols and their respective payouts, you will need to make your way to the control panel to select your bet size. The wide variety of stakes on offer is attractive as it caters to all types of slot fans, regardless of their pocket size. You can spin the reels from as little as $0.20 a spin or you can go for glory by placing the maximum bet allowed in the game that peaks at $100.00. The new slot also offers a handful of additional settings and features, including an autoplay feature to select up to 250 automated spins as well as a Turbo Mode and several sound settings to further enhance your gameplay experience.

The new Ancient Eclipse slot from Yggdrasil Gaming impresses with glorious visuals, epic sound effects, and tons of lucrative bonus features to keep you entertained. You will also be pleased to know that it comes with a 96.53% return to player ratio and is a medium variance slot. Before you embark on your quest, we suggest that you claim a Mr Green Casino bonus as this will further enrich your chances of walking away with a win.