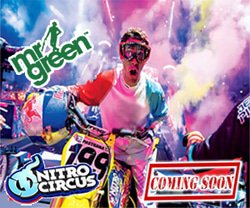 Yggdrasil Gaming has recently signed an exclusive partnership deal with Nitro Circus to create their very first branded video slot that is sure to rock the casino industry.

Yggdrasil Gaming, the phenomenal online slot developer based in Malta, has built quite the reputation over the years as both an original content creator and visionary supplier. This extraordinary company has managed to rock the online casino industry with innovative and truly compelling slot titles, such as Vikings Go Berzerk, Penguin City, Valley of the Gods, Jokerizer, Pumpkin Smash, and their most recent title, Wolf Hunters.

To offer slot enthusiasts another incredible reel-spinning adventure at Mr Green Casino and to further enrich the iGaming industry, the creative kitchen at Yggdrasil Gaming has recently announced that they are in the process of developing their very first branded online video slot and there's absolutely no doubt that it will be nothing short of remarkable. The new Nitro Circus slot will soon be available on desktop as well as the Mr Green mobile casino for smartphones and tablets.

The countdown to the launch of Yggdrasil's new Nitro Circus slot has already begun and slot enthusiasts can view the countdown on the official nitrocircusslot.com webpage. Eager fans of the new slot release can also watch a very special introductory message and action-packed trailer from motorsport competitor, stunt daredevil, legendary sports athlete, and co-founder of Nitro Circus, Travis Pastrana.

The Origins of Nitro Circus

Nitro Circus is considered to be the only action sports entertainment brand to deliver the biggest and best, mind-bending cross-platform performance for both daredevils and wannabes that love to take risks in the spirit of friendship and excitement. From humble beginnings with Jeremy Rawle, Travis Pastrana, and Gregg Godfrey burning DVD's from their Utah-based garage in 2003, the Nitro Circus brand has exploded in popularity around the world ever since, leaving lasting impressions to all who watch their insane stunts across the globe.

With multiple crazy stunts on their first DVD release, it should come as no surprise that they were an instant hit with fans as it featured Travis Pastrana and his outrageous crew members performing some of the most insane stunts on a wide range of contraptions. In 2009, the Nitro Circus brand partnered up with MTV where they produced a brand-new television series that was aired in more than 60 different countries and is still considered one of the best and most popular television series on MTV of all time.

During 2010, the Nitro Circus brand received a complete make-over by Mike Porra, a veteran in the action sports industry, which led to the birth of Nitro Circus Live. Since 2010, the world-renowned show has travelled across the globe where they continue to grow their fan base while destroying box office records a time and time again.

Details on the Nitro Circus Slot

Unfortunately, there are no further details on the bonus features, graphics, animations or background music on the all-new Nitro Circus video slot from Yggdrasil Gaming other than the release date from the nitrocircusslot.com webpage. However, there's absolutely no doubt that the latest slot from Yggdrasil Gaming in November will be a mind-altering experience. Players can expect an adrenaline-infused reel-spinning journey with sweating palms and spectacular visuals while strong riffs and drums take care of the music and sound effects with each spin your initiate.

Once November rolls around, you can be sure that all Yggdrasil casinos will feature the latest and greatest online video slot based on the Nitro Circus brand. In the meantime, you can indulge in a captivating and immersive live dealer experience with the innovative live dealer casino platform at Mr Green where you'll find a comprehensive list of the best live dealer games from the world's most exceptional software developers.